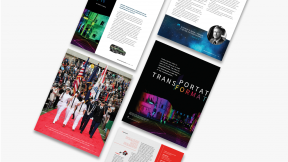 Thank You to Our Fall Readers

Making Flight Safer With the “Internet of Airplanes”

Preparing for Another Moonshot

Summer Here, the World Away

An Anchor and a Compass

A Celebration of Leadership

As I’m sure many of you did, I read “Don’t Fly in 10 Years” [One Last Thing, Fall 2017] in the recent alumni magazine. I read this with some interest, having served for some time in the aerospace industry (retiring a couple of years ago from a large Northwest aerospace firm).

The author, Lawrence Stoker ’10, does make valid points about new technologies, and the cautious approach to be taken with same. He also is correct regarding our continuously changing understanding of physics and materials properties (these concerns are applicable to all fields, including structures). Mind that I am only familiar with the commercial (not military) side, but I might mollify a few of Lawrence’s concerns, modify another, then add a couple (again, on the commercial aviation side).

In each commercial accident cited in the article (and indeed, all commercial accidents/incidents), there have been regulations and policy put in place by the regulators (Federal Aviation Administration, European Aviation Safety Agency, and others) that are meant specifically to prevent recurrence of any similar accidents. These regulations and policies are typically vetted over a few years between industry and regulators. The vetting explores root causes, possible related issues, and acceptable/comprehensive testing and analysis techniques for the future designs (and, if necessary, for existing designs). Also note that there are regulatory processes to ensure short-term safety while these new regulations are put in place.

Indeed, the whole issue of “aging” airplanes has had a massive review and recodification in the last 15 to 20 years that continues to be refined to this day. This includes “aging” issues in structures, fire safety, and wiring.

Indeed, the whole issue of “aging” airplanes has had a massive review and recodification in the last 15 to 20 years that continues to be refined to this day. This includes “aging” issues in structures, fire safety, and wiring.

Having said that, the possible issues with commercial aviation that I see could be stated as follows: First, “we don’t know what we don’t know,” i.e., what aspect(s) of physics in materials, design, or the environment has not manifested itself during test or service. Obviously the best and most experienced minds in the industry have generated the testing and analysis suites that certify our current airplanes, but there are stories I could tell.

Second, I totally agree with Lawrence about the culture that assumes that the computer and a few buzzwords make for a robust design and certification process. Increasingly, the management in some corporations is staffed with non-technical people. People more likely to use buzzwords to close out a meeting, rather than ensuring that concerns and action items are understood by all, catalogued, and resolved. People who might “hypothetically” question whether fire (outside the engine case) on an airplane is a problem (don’t ask). And one has to look no further than the Challenger and Columbia disasters to find culture issues prevalent in some parts of the industry, where data is required to prove unsafe rather than the reverse.

Third, automation and software may sound like a panacea for many systems’ issues, but this technique must be approached with extreme caution. Whenever someone touted automation as a solution, I always tried to temper my enthusiasm. The vision of a cockpit computer screen, prominently displaying a smiley face, all poking out of a smoking hole in the ground, is my worst fear.

Lawrence says, “Could it be that the next aircraft crisis is right around the bend?” Possibly. For that, I would look to one of the possible causes above, and not necessarily to the specific commercial accidents cited.

Regardless, commercial airlines tend to be very safe. And it remains for concerned and proactive engineers (as I am sure Lawrence is) to put themselves on the line, to look for, investigate, and prevent future issues. I did it for 40-plus years, and now I pass the baton to Lawrence…

“(What we displayed was) a failure of imagination…” — Frank Borman, circa 1968, regarding the root cause of the Apollo 1 fire.

Richard Lorenz ’73, an aeronautical engineering graduate, lives in the Seattle, Washington, area. He retired after a 44-year aerospace/aviation career. He is a Tech Fellow, Designated Engineering Representative (DER) for the FAA, and DER Advisor.

Give Us Your Feedback

Opinions expressed in these pages do not necessarily reflect the views of the editors or the policies of the Institute.