Arthur Goldstein thanks his classmates who contributed to the column. “Some who added their thoughts and accomplishments are Sam Wait, Bill Moller, Rick Schoenhardt, Harry Carlson, John Lavery, Bill Glaser, John Foehl, Richard Greenberg, Gordon Kilby, Bob Eltz, Michael Rose, and Arnold Berger, to name a few. Thanks, also, to my wonderful wife, Gloria, who reviewed and edited the column. Stay involved and healthy,” he says. Posted 2021-09-29
After 32 years, about 150 columns highlighting the exploits of about 400 members of our class, and enjoying wonderful interaction, I have decided to retire from Class Notes. Throughout this period of time, our great Class of ’53, which included many veterans of WWII, have made a distinct mark on society. Our families, professions, travel, schooling, hobbies, politics, and support of organizations has shown a level of commitment, morals, and ethics to have moved our school, country, and the world in significant directions. Stay safe and involved! — Arthur Goldstein ’53; agaent@aol.com Posted 2021-02-26
Engineering Arthur Goldstein writes: Dr. Shirley Ann Jackson was appointed president of RPI in September 1999. Gloria and I were present at the inauguration where then-Senator Hillary Clinton made a stimulating address. Since then the changes have been monumental. Rensselaer magazine, fall 2019 issue, has a wonderful review of the 20 years of progress. We have become leaders in biotechnology, nanoscience, design prototyping, advanced computing, and media arts. Facilities equal to these innovations have been built along with the East Campus Athletic Village. Dr. Jackson has served on many boards of leading organizations, becoming an outstanding ambassador for the college. She follows in the footsteps of former President George Low. RPI is a world-class school for the 21st century. The progress has not come easily, however. It makes us proud to see our alma mater advance in a multitude of directions. Read “Celebrating 20 years of Leadership” in the fall issue. Posted 2020-05-18 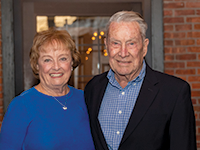 Engineering Linda and Bill Glaser (LPD1723@ aol.com) celebrated the 33rd Entrepreneur of the Year award. It was bestowed upon two alumni and a former faculty member for the first PC-based “virtual classroom” and conference software products. Posted 2020-05-18
Bill Glaser (L PD1723@aol.co m) sold his Naples, Fla., home and purchased a senior housing condo on the Florida Gulf. Now he doesn’t have to change light bulbs or perform maintenance. He is free to concentrate on intellectual and physical activities. Bill drives a Chevy Volt which has great gas mileage, but has to push the car after 60 miles on battery. Posted 2019-10-01
Richard Greenberg (rich9830@aol.com) was preparing his superb collection of Brazilian stamps for a show in June 2019 in Washington, D.C. He was aiming to receive a gold medal. Hope all philatelists and alumni show support. Posted 2019-10-01
Arthur Goldstein writes: I know that our group is advancing in age, especially the World War II veterans. I would still appreciate information from you such as books, movies, family news, travel, hobbies, education, politics, or any things you would like to share.

I am teaching a Great Decisions course with A/V by the Foreign Policy Association (FPA) for the fourth year at Westchester Community College. We have an oversubscribed adult group for this non-partial class covering subjects such as Migration, Nationalism, China Trade, and Cybersecurity. This excellent course is given in libraries, houses of worship, schools, etc., throughout the U.S. Check it out.

A book I recommend is Presidents in War by Michael Beschloss. It highlights seven presidents and presents a historical perspective that is new and revealing with excellent writing. Especially interesting are Polk, FDR, and Truman. Please keep in touch. Posted 2019-10-01
Dr. Robert Pavan (’51, ’52, ’53 M.S.) was awarded the Demers Medal, for long-term service, at the October Awards Dinner at RPI. Posted 2019-09-11
Arthur Goldstein writes: Our 65th Reunion took place the weekend of Sept. 27, 2018. In attendance were Bob Goldberg and Marge, Al Birks and Joan, Charles Bucci, Harry Carlson, John Kaestle and Louise, Warren Rasmussen, Brooke Schumm, Gordon Kilby and Judy, Jack Newton, and Stephen Puzier. President Shirley Ann Jackson presented a stimulating talk on campus life. Some highlights! We are preserving our Greek System; however, we need to control hazing, drinking, drugs, and other distractions. We had over 20,000 applicants to the college with scores that are higher than ever. RPI is considered one of the best STEM and architecture schools and is now planning to offer new music and academic programs. Diversity among male and female students is at an all-time high. Our school is deeply involved in health informatics using AI, intelligent machines, and large-scale data accumulation and processing. We partner with IBM and the famous Watson computer system affecting electronic health data. An excellent panel of experts in health care followed the president’s presentation. The weekend also included “RED” Talks (similar to TED Talks) on subjects where RPI is influential in biotechnology and interdisciplinary studies. Participants attended the 50 Year Club Luncheon at Heffner Alumni House and an elegant dinner at the East Campus Athletic Village. There were many stimulating choices of events to attend and people to mix with on campus. Bob Goldberg provided an excellent summary of the weekend. Bob and Marge live in Portland, Maine, in an adult community. They celebrated their 65th wedding anniversary and make use of the cultural and physical facilities of the area. They keep in touch with Jacques Stanlea (Switzerland), Warren Rasmussen (Florida), Harris Siegel (Rochester), and Harry Carlson (Altamont, N.Y.). Bob’s advice is to downsize while you are still able to. Gloria and I were not able to attend due to a severe cold. So sorry we missed the event. A wonderful source of information is the ability to stream speeches on the RPI website. Go to: president.RPI.edu and look for the September 2018 speech. Very, very stimulating! Posted 2019-03-10
Bruce Clements ’85 sent a letter highlighting his “student liaison” with our class at our 30th Reunion in 1983. We had 52 alums which I believe included Dick Somers, Bill Shoop, Bill Glaser, Bob Graham, Sam Wait, Gordon Kilby, Rick Schoenhardt, Bill Moller, Sam Markowitz, Arthur Huff, Francis Skelly, Rod Procaccino, Mike Maas, Len Kranser, Harry Carlson, Don Beebe, Don Beard, and Hank Clark. (Who else?).

Some from Phi Sigma Delta were Jim Silberman, Chester Gerber, Jim Markin, Larry Michaels, Richard Greenberg, Herb Cohen, Mike Rose, Ron Rubin, and Carl Puchall. Bruce (’85) remembers our singing RPI fight songs as we moved to each event. He sent thank you notes to all 52 but only received my acknowledgement, thus sending me this letter. He hoped his 1985 class would be as enthusiastic as ours, as he said, “you guys rocked back in 1983.” Thanks, Bruce, for stimulating our nostalgia.

Comic book writer Peter Tomasi, along with artist Sara Duvall, has written a “graphic novel” on the building of the Brooklyn Bridge. The book had a fine review in the NYT, April 16, 2018, titled “A Family, a Vision, and a Bridge.” The book illustrates Washington Roebling (Class of 1857) and his wife, Emily, and their Herculean task. Remember also The Great Bridge by David McCullough and Chief Engineer by Erica Wagner (reviewed previously). Our RPI legacy is secure with the bridge and the world-famous Ferris wheel, which illuminates so many cities around the world. Posted 2018-10-10
Arthur Goldstein shared some of his personal highlights from the Reunion & Homecoming weekend, which was held in October 2017 and coincided with the kickoff of a campaign to raise $1 billion for student scholarships, supporting faculty, and updating infrastructure.

One highlight from the weekend was Dr. Robert Pavan (’51, ’52, ’53 M.S.) being awarded the Demers Medal for his long-term service; another was Bill Glaser’s Entrepreneur of the Year award being given to Jayant Kadambi ’85 ’86 (B.S., M.S.) as founder and former CEO of YUME Corp. Arthur also cited the "Red" talks as another highlight; during the talks, attendees listened to five short discussions on current technology such as “Listening to the Climate of the Earth,” “Architecture Acoustics and Music,” “Big Data Exploration,” “Synthetic Biology,” and “The State of AI and Cognitive Sciences.” In Arthur's words:  "Amazing and stimulating!"

Arthur also mentioned an excellent book which he recommends: Chief Engineer by Erica Wagner, which tells the story of Washington Roebling (Class of 1857) and the family history. Arthur notes page 71 may be of particular interest. Before reminding his 1953 classmates of the September 2018 alumni weekend celebrating their 65th Reunion, Arthur closed with the following poem, entitled "Why," from their poet laureate Michael Rose: The young ask “Why”?/ Why do nations fight for “face”/Risking our entire race? Why can’t people live in peace?/Why can’t war and turmoil cease? Why do some get rich and some stay poor?/Why do those who have fight for more? Why do people hate their brother?/Why not learn to trust each other? Why do we waste nature’s grants/To improve our circumstance? Why do cities rot from blight?/Why can’t mankind do it right? The young ask “Why”/Until they’re old…and die. Posted 2018-03-15
Science During his 40-year career at Uniroyal, Frank Cesare accumulated 14 patents in organic chemistry. He has six children and eight grandchildren. Posted 2018-03-15
Sam Wait and his wife Carol celebrated their 60th anniversary in June 2017.  Married in London, England, in 1957 while Sam was at the University College on a Fulbright Scholarship, Sam and Carol have now moved to the Glen Eddy retirement community in Niskayuna, New York.  Sam reports that classmate Gordon Kilby and his wife Judy are also Glen Eddy residents. Posted 2018-03-15
Reunion & Homecoming weekend, October 2017, focused on “Transformative,” which coincided with the kickoff of a campaign to raise $1 billion for student scholarships, supporting faculty, and updating infrastructure. They announced they had already raised over $400 million.

Frank Cesare (B.S. Chem., Ph.D.) attended the weekend with me. He has six children, eight grandchildren, and while at Uniroyal for 40 years, accumulated 14 patents in organic chemistry. The evening included a beautiful dinner at the Curtis Priem ’82 (EMPAC) Experimental Media and Performing Arts Center and a concert by the RPI student orchestra.

Bill Glaser’s Entrepreneur of the Year award went to Jayant Kadambi ’85 ’86 (B.S., M.S.) as founder and former CEO of YUME Corp. It is a digital video advertising media and software technology company. The award is based at the Lally School of Management.

One of the highlights of the weekend included the “Red” Talks. We listened to five short discussions on current technology such as “Listening to the Climate of the Earth,” “Architecture Acoustics and Music,” “Big Data Exploration,” “Synthetic Biology,” and “The State of AI and Cognitive Sciences.” Amazing and stimulating!

An excellent book that I recommend is Chief Engineer by Erica Wagner. It is the story of Washington Roebling (Class of 1857) and the family history. See page 71 in particular.

A poem by our poet laureate Michael Rose: “Why.”

The young ask “Why”?/ Why do nations fight for “face”/Risking our entire race? Why can’t people live in peace?/Why can’t war and turmoil cease? Why do some get rich and some stay poor?/Why do those who have fight for more?

Why do people hate their brother?/Why not learn to trust each other? Why do we waste nature’s grants/To improve our circumstance? Why do cities rot from blight?/Why can’t mankind do it right? The young ask “Why”/Until they’re old…and die. Posted 2018-03-10
Sam Wait wrote that “Carol and I celebrated our 60th anniversary in June. We were married in London, England, in 1957 while I was at the University College on a Fulbright. We are now living in the Glen Eddy retirement community in Niskayuna, N.Y. Gordon Kilby and Judy are at the same center.” Posted 2018-03-10
Back to top