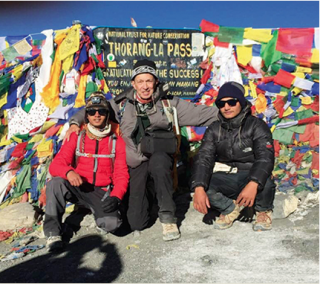 Classmate Robert Sturm sent in a short description of his 2017 trek of the Annapurna Circuit in Nepal with a guide and porter. In spite of a torn MCL and a knee brace, he completed the 90-mile trek that went through the 17,700-foot-high ThoRang-La Pass in 16 days. The weather was cooperative with only one day of rain/snow, which allowed Robert to take many outstanding pictures of the mountains in the Annapurna range. He describes the trek as a great adventure in spite of returning home with pink eye and a mild case of bronchitis. Posted 2018-10-10
Bill Criss and his wife, Judy, have completed their move from northern Virginia to Sunset Beach, N.C., and Bill adds that he has found that mint juleps can ease the challenge of downsizing. Bill, who is looking forward to this year’s 50th Class Reunion and has been in contact with George Casey and Jerry Sweeney to help organize the festivities, has promised to bring his collection of Bachelor magazines to the Reunion to highlight how much campus humor has changed in 50 years. Posted 2018-03-15
Back to top