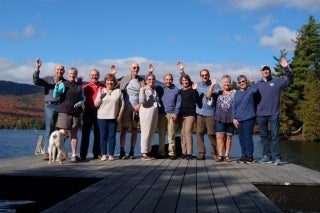 "My apparent date (I actually met her three years later) had a far better offer from a fraternity brother, and my wife was just too uncomfortable to come down from the stands when they called her name." "So the remaining guys and gals were paired by forming two long lines. Then it was just “you with you.” I suspect I might be the only person who ever married his Phalanx Dance date, or at least stayed married since 1967." "I have been so fortunate in so many ways over the years, but meeting my bride (Joyce) was by far the best thing that ever happened in my life.I am thankful to RPI that they made sure that each of us “geeks” went out on at least one date in our college career!" Posted 2018-03-15
Seth Bergmann ran the Delaware Distance Classic 15K race in Delaware City, Del., on October 8, 2-17, finishing in 1:09:37, earning second place among men aged 65-69. Posted 2018-03-15
Back to top