Mark Berube was diagnosed with colorectal cancer in 2011. He continued to work through 2018, supporting the U.S. Air Force at the Pentagon, while focusing on time with his family. After an intense eight-year battle, he passed away in July 2019. RPI and his fraternity, SAE, were very important to him. Mark is survived by his wife, Karen, and three children, Allie, Nicole, and Matthew. He will be missed by all who knew him. Posted 2021-09-29
Mark Griffon is visiting assistant professor of health services at Anna Maria College in Paxton, Massachusetts. Posted 2021-09-29
Michael Bartikoski joined Diamond Crystal Brands as chief operating officer. Prior to joining Diamond, he was vice president of frozen manufacturing and supply chain operations at Rise Baking Co. Posted 2021-09-29
Kevin retired and we have relocated back to Carson City, Nev. Our home that was rented for eight years needs lots of TLC so “staying at home” has allowed us to make a dent in the project list.  — kupde@sbcglobal.net Posted 2021-02-26
William Morales had to look for a new job due to the relocation of the Bureau of Land Management to the West. Fortunately, he found a job with the Department of Defense in the same line of work. Additionally, William has started posting YouTube videos. One shows you how to convert a 3-foot-tall, battery-powered Christmas nutcracker so that it uses either AC or battery. The other video shows how to convert a folding bike to electric. Posted 2021-02-26
Todd Engelhardt ’84, MBA, has been named regional director of investments at Cumberland Advisors. Todd will provide investment advice to individuals, institutions, retirement plans, and government entities throughout Southwest Florida. A Series 65 licensed adviser, Todd has more than 30 years of investment management experience. Posted 2021-02-26 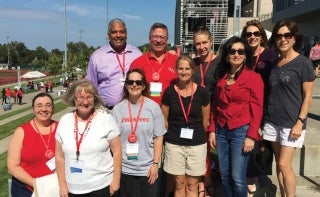 Connie's oldest daughter is also an RPI graduate (2015) who married her college sweetheart, and she now lives in Texas; Connie's husband Ed missed the Reunion, as he was home with their youngest son, who hasn't decided if RPI will be his future! Connie is busy with full-time employment and Ed with running his own business.  Posted 2018-03-15
John Tesoro was named president and CEO, responsible for American operations, of TUV SUD—a world leader in testing, certification, inspection, and training—in October. In its announcement regarding his new position, the company had the following praise for John: “An experienced technology executive with a collaborative, deliberate, process-oriented leadership, John’s previous experience includes transformative solutions selling processes, organic growth initiatives, successful acquisitions and business unit restructurings, involving strategic planning, market research, financial modeling, due diligence, divestitures, and business integration—all invaluable skills that will help keep TUV SUD America on its continued course of development and growth, and most importantly to be the solutions provider of choice for clients.” John resides in the Boston area with his family, and will be based out of the company's Peabody headquarters. Posted 2018-03-15
Nambirajan Seshadri, M.S. ’84, Ph.D. ’86, former chief technology officer, Broadcom Corp. and NAE member, received the 2018 IEEE Alexander Graham Bell Medal, the highest honor conferred by the IEEE in the field of communications and networking. Posted 2018-03-15
Tobi Saulnier had a nice write-up in the Albany Times Union last summer. Tobi, who founded 1st Playable because she wanted to create games with a social purpose, earned her bachelor’s, master’s, and doctorate at RPI and used the RPI incubator to help start her business in 2005. At that time, only 11 percent of the game-development community was women. Now the number has grown to 22 percent; however, the changing industry has brought new challenges and opportunities. According to Tobi, anyone can produce a game; the challenge is making something people will pay for from a professional. Tobi has focused on educational games, building partnerships with organizations like The Environmental Law Institute, and maintains the principles she started with—putting people first, getting outside whenever possible, and having fun wherever possible. 1st Playable now resides in a former ballroom at Troy’s Market Block. Posted 2018-03-15
Back to top